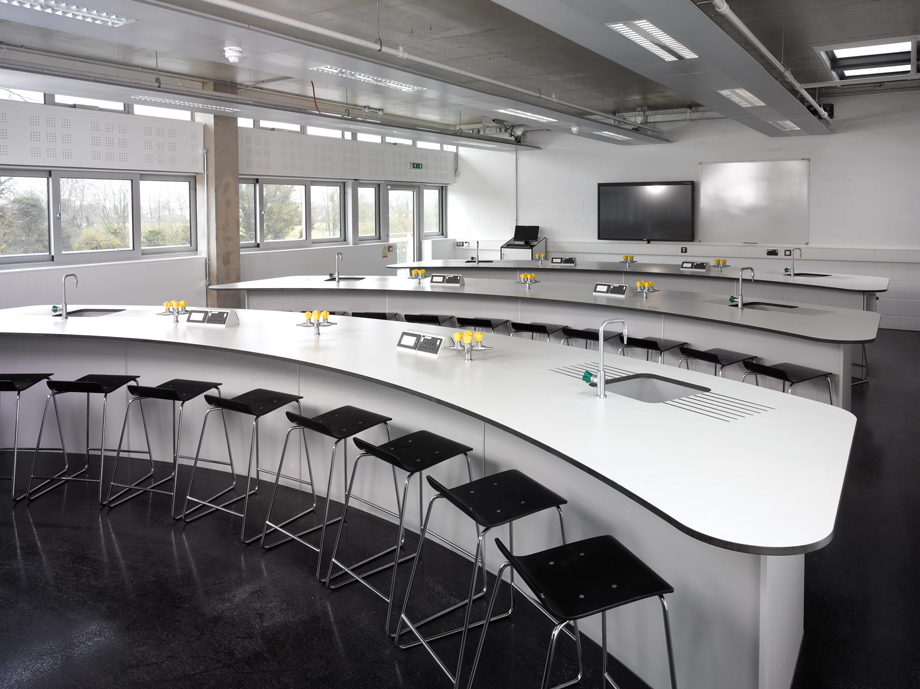 David Game College have invested in three new labs and a prep room for chemistry and biology. The College has chosen a combination the fully serviced Crescent island bench system and  fixed perimeter benching with Corian work surfaces and seamlessly jointed Corian sinks throughout. The scheme also includes a Mobiline re circulatory Fume Cupboard which can be shared between the labs.

Haberdashers Monmouth Boys School are refurbishing 12 labs for biology, chemistry and physics. The school has opted for an arrangement of fixed service towers and moveable tables to enable rearrangement from formal lecture mode to interactive group work. The worktops and sinks will be Corian throughout. The project also includes a number of fixed Ecoline Fume Cupboards which will be vented to atmosphere.

Gregg School have developed 5 labs, I prep room and a Food Technology Room. The labs will utilise Polylab worktops with cast epoxy resin sinks and will include a Mobiline re circulatory Fume Cupboard to be shared between the new labs. The Food Tech room features Corian worktops and seamlessly jointed Corian sinks.

Concord College is building a brand new science block which will accommodate 21 labs for biology, chemistry and physics, 2 specials labs and 3 prep rooms. The furniture system chosen is a combination of the standard S+B Wing System and bespoke modules developed specifically for the College. Corian worktops and sinks will be used throughout.

Apart from the fact that S+B were asked to provide the designs and were eventually commissioned to manufacture and install the furniture systems for all of the above, there are a number of other common strands. All the schools/colleges see their project as a major investment with a 25 year life cycle. For that reason all were determined not to compromise build quality and did not pursue lower specification alternatives because they saw that as being a false economy. All the schools also wanted a modern, compelling new facility which would stimulate students interest in science and technology. For that reason, all wanted interesting layouts and professionally styled furniture systems rather than a joinery/carpentry type construction industry sub contract offering. The schools/colleges did not want second best and worked with S+B to develop their requirements and ultimately took responsibility for their own selection of product and material rather than delegating to a third party. Let there be light! Season’s Greetings from S+B UK Our methodology series: Installation ISBA Conference 2021 University of Warwick IBRB – Winner of the Property Awards for Sustainability How to properly store chemicals in the lab